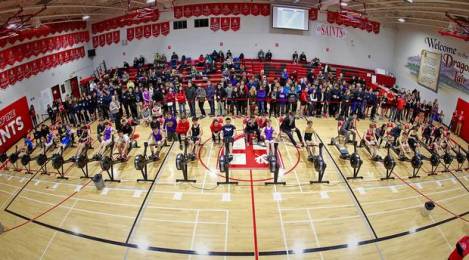 Personally, I have been competing in this rowing championship since 2004.  The event is open to children from 14 years old to mature athletes of 80 years of age and beyond….

As you can see from the pictures above, athletes from the same category are placed beside each other and the winner is the person who rows the 2000 meters in the shortest amount of time.

In the context of this championship, the indoor rowing machine is used as a tool to challenging oneself, both physically and mentally to row the 2000 meters piece as fast as possible.

But the use of indoor rowing machine may also serve many other health and fitness related purpose.

Here is a short list of some of the reasons why we believe indoor rowing should be part of the workout plan for most people interested in good general health and fitness:

Everyone can use the rowing machine, at any age:  There are no age limits to become an indoor rower.  I know people in the 80’s and even in their 90’s who are still rowing regularly. Since indoor rowing is a low impact exercise and easy on the joints, bad knees or bad hips are not a problem anymore.  And actually, since it’s easy on the body but yet provides a great workout, many people, recovering from an injury, are prescribed the use of the rowing machine!

Indoor Rowing definitely burns calories. Since rowing is both strength and cardio vascular intensive at the same time, your muscle mass and lungs/heart system are constantly challenged during your rowing workout. Depending on effort level, a 160lbs male will burn between 200 and 300 calories in 30 minutes of rowing.  And doing some High Intensity Intervals ( example: 30 secs rowing/30 secs off…) will greatly increase the amount of calories burned during and after the workout, due to EPOC (excess post-exercise oxygen consumption)

You can track your progress. Just like tracking your speed when running or logging how many miles you walked or rode your bicycle, you can track your distance, speed, calories burned and time on the rowing machine, too. And as you get fitter and stronger, you can begin to set yourself some performance based goals: how fast you can row a 5K or how far you can row in a set amount of time…

Rowing is good for the Soul! Many types of exercises have showed to increase positive mindset and decrease anxiety, and rowing is particularly relaxing due to its rhythmic nature. The repeated pull-and-push motion is very good for calming the mind! Listen to your favourite tunes while you row and spending time on the rowing machine will soon become your favourite activity!

Ok, ready to give the rowing machine a try?

To start with, adjust the foot pads so your shoe fits properly. The toe strap should be around the widest part of your foot, which often coincides with the bottom part of the shoe laces. Then grad the handle with an overhand grip and you are ready to row!

For further details on how to effectively perform the rowing stroke on a rowing machine, click this link: http://www.concept2.com/indoor-rowers/training/technique-videos